Poutine: The Food of Gods 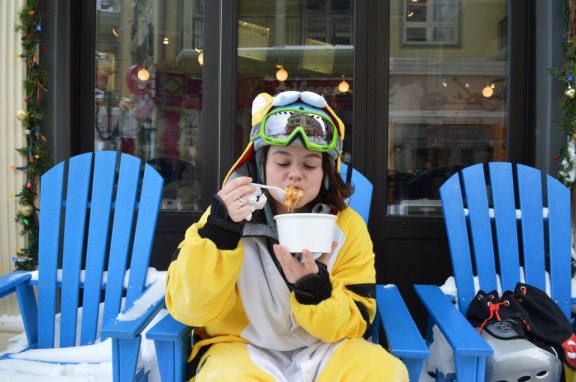 Chips, cheese and gravy sounds like an unlikely combination. Yet this is arguably Canada’s national dish. Poutine is about as incomprehensible to us English folk as a corn dog or a Twinkie. But mention its name to a Canadian who has strayed from home and their eyes will glaze over in wistful reverie.

It’s not an attractive dish – essentially made up of clumps of melted cheese swathed in thick gravy with chips buried underneath. Allegedly, the gravy was first added in 1950s rural Quebec to keep the chips warm. However, once you untangle the chips from the sticky pot and bite through the cheesy stock-covered french fry, you’ll understand the taste appeal.

Ski resorts serve it by the barrel and there are gourmet versions sold in Toronto’s very own food trucks. Just check out Smoke’s Poutinerie (now turned permanent restaurant) – with crazy additions like beef tacos and fish sticks.

A personal favourite from a recent trip across the pond was Mile High Poutine in Blue Mountain, a ski resort two hours north of Toronto. Served from a little hole in the wall, this brand new food stand opened in December, serving poutine every way you could want it. Steaming pulled pork or buffalo wing chicken can be piled on top – or just have the Classic Mile High. They even offer gluten-free gravy for the allergy-stricken (handy!)

The big question is: where can you sample poutine in London?

3 thoughts on “Poutine: The Food of Gods”